How is my data normalized in Spectronaut™?

How is my data normalized in Spectronaut™?

The aim of data normalization in proteomics is to correct for the variability that is not coming from the biological system itself but from the experimental process, mainly multistep sample preparation, and LC-MS instrumentation, especially if the samples were processed over long period of time or measured using different instruments. This variance can cause a bias, affecting the biological conclusions.

Spectronaut default settings or BGS Factory Settings applies normalization to the data to minimize the effect of the variability generated by the sample preparation and the LC MS performance. This default normalization is based on the assumption that the samples used are similar, meaning the majority of the precursors within the samples are not regulated and that, for those which are, there is a similar number of peptides up and down regulated.

The default normalization is performed on the precursor level across all experimental samples (cross-run normalization). The normalized precursors quantities are subsequently used to derive peptides and protein groups quantities, without additional normalization at those levels.

Normalization can also be turned off. This would be advisable, for example when analyzing samples with different levels of complexity.

1. Create and save a custom schema with your suitable normalization option by going into the Settings Perspective (Figure 1), or

2. Change the option while setting up the experiment in the Experiment Setup window (Figure 2). 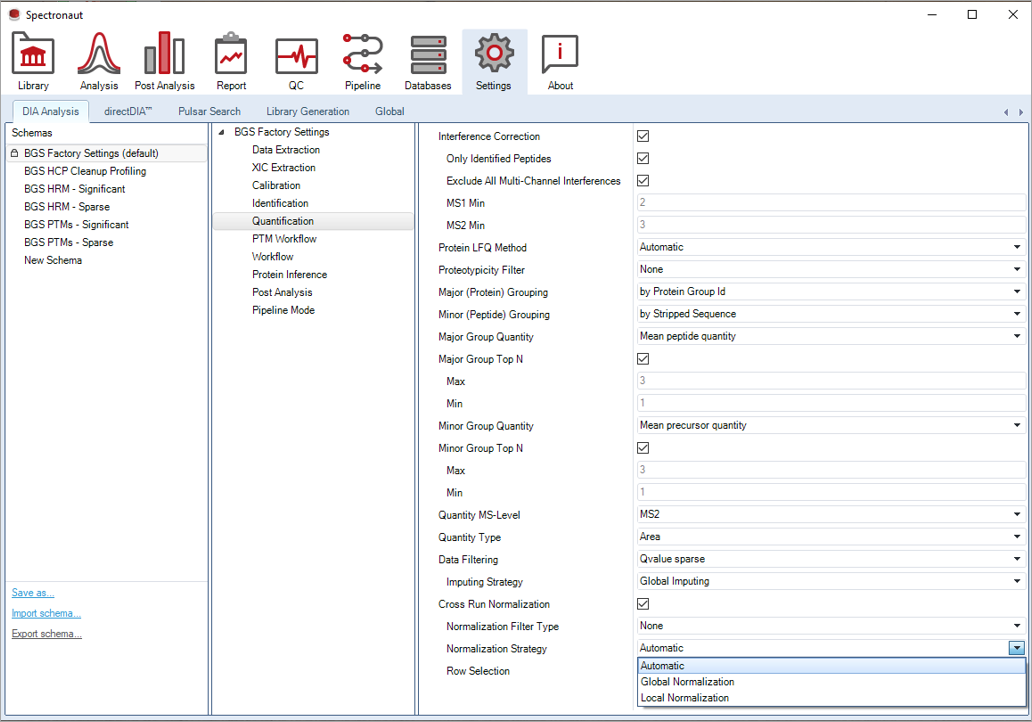 Figure 1. Saving a custom schema in the Settings Perspective

Figure 2. Changing the analysis settings on the Experiment Setup window

3. In an already analyzed dataset, you can right click on the experiment tab and choose Settings (Figure 3). In the Quantification node, you can change the normalization strategy and click confirm to apply the change. Using this option, you can also quickly check how the changed normalization strategy will affect quantification of protein groups and peptides as well as results of differential analysis. 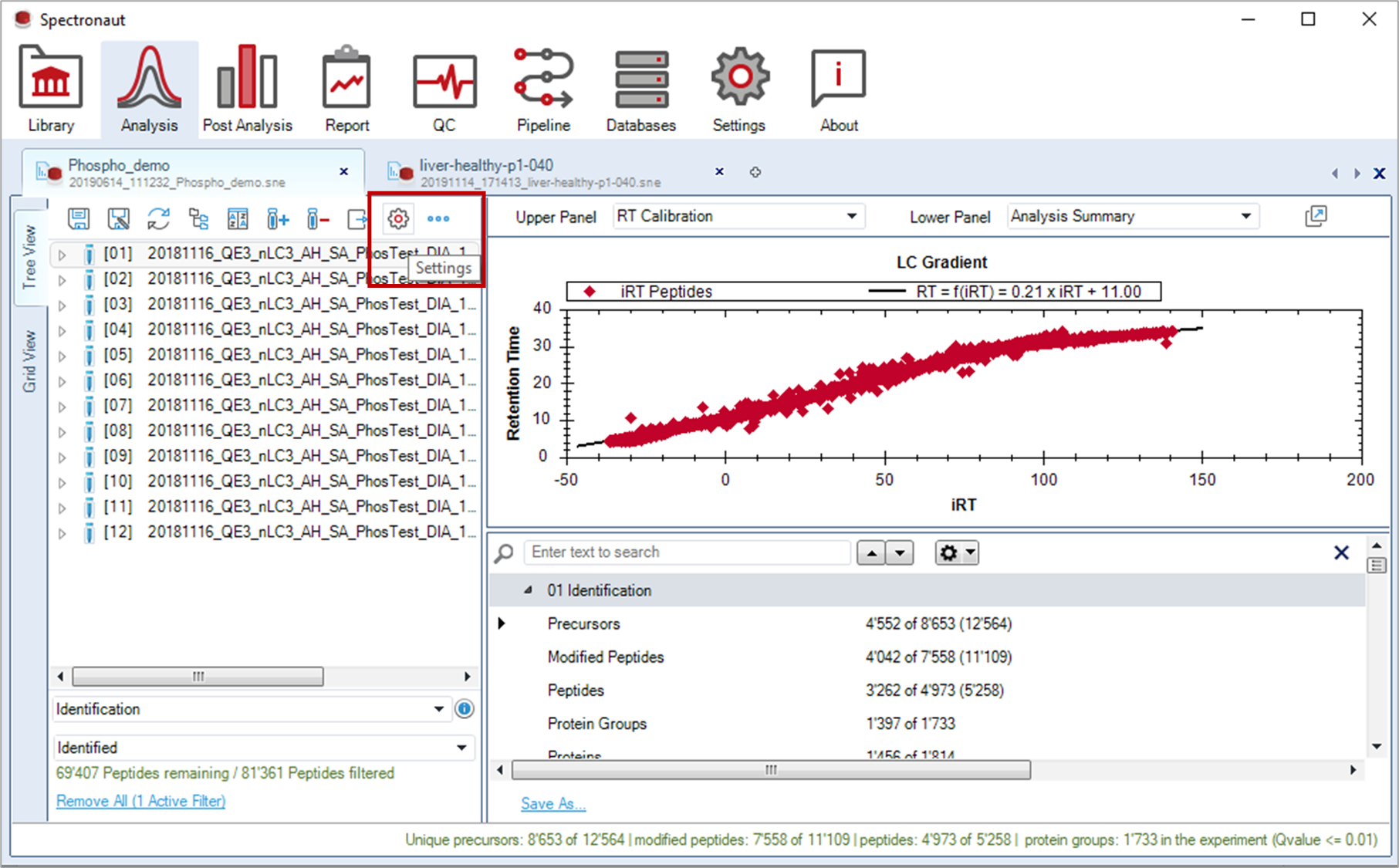 Figure 3. Changing the settings to an already analyzed dataset

Further normalization options include selection of the precursors used for normalization. For example, if the experiment is performed on mixed species samples, the user can choose to normalize on only one of the species by selecting the corresponding FASTA file. In addition, if multiple libraires are used for extraction, a library-based precursor filter could be also applied. Finally, a modification-based filter can be applied. This filter allows normalization on the precursors that carry the specified modification. That workflow can be especially useful for PTM enriched samples.
By default, the normalization algorithm will select 10000 precursor profiles, ranked by level of completeness. However, the completeness of precursor profiles used for normalization could be further specified by the user. For example, selecting Q value complete filter will allow normalization based on only such precursors that were consistently identified across entire experiment.

To see the effect of the normalization, Spectronaut creates a pair of plots where you can visualize your quantitative data throughout your runs before and after normalization. You can find them in the Post Analysis Perspective, Analysis Overview node and Normalization (figure 4). 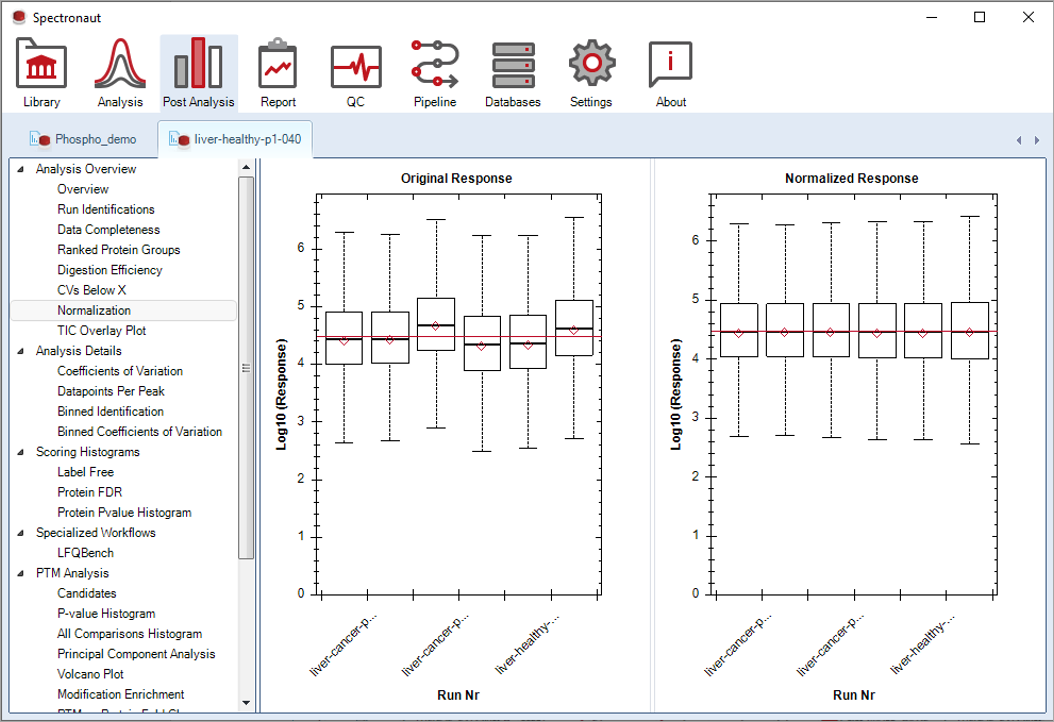 One important aspect regarding normalization are those cases in which the samples are pre fractionated. In such cases, normalization should not be done throughout all runs, but by fraction. This should be annotated accordingly in the Conditions Editor when you set up your experiment (figure 5).

Figure 5. Annotating the fractions on the Conditions Editor is required for proper normalization